Well, I blogged about these a little while ago in Crochet toilet roll dolls.

The dolls arrived a couple of weeks ago so I had a look around online for some patterns and they were sadly lacking. Lots and lots of pictures of various styles of these dolls but hardly any patterns. I’d already got some wool that matched the doll’s eyes – that’s not weird is it?

In the end I found two. The first one I tried just didn’t seem to make sense. I crocheted a few rows and couldn’t work out which bot of the dress it was! It didn’t help that there weren’t any pictures with the pattern, just the finished article. The second wasn’t much better. I started the bodice of the dress and it quickly became apparent that it was wayyyyy tooooooo big for my dolls. Also, again it was just a pattern and no real explaination of which bits of the dress you were doing.

So, like I usually end up doing, I made it up as I went along. And it came together pretty well.

I liked one bit of one of the patterns and kept that. Quite nifty idea that I’d not tried before. You do your first chain around around a small elastic band. You end up with a stretchy piece of crochet. I used this to make the very top of the bodice so that it would fit nice and snug. It also means that the dress is removable and not sewn onto the doll.

The it was just a case of doing a strap for a halterneck and doing a few daisies to sew onto the dress. I also did a belt around the waist and a headband with a daisy.

This is what she ended up looking like – not bad eh? 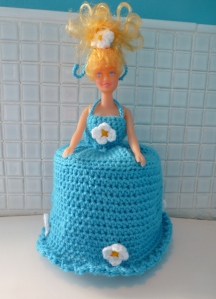 I think I’ll sort out the pattern next and I’ll post it up. Let me know if you want a copy. I’ll try and make it easier to follow and with some pictures 🙂

If you would like one of these dolls to grace the smallest room in your house – then you can find it here Quirky Purple crochet toilet roll cover doll on Etsy.